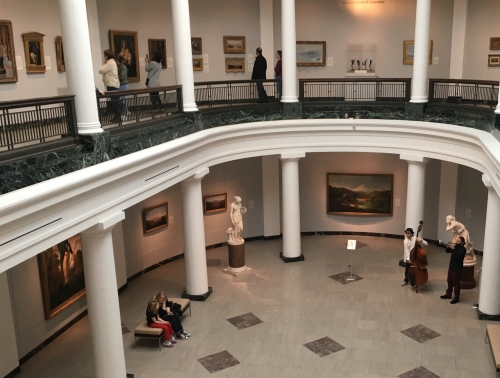 Adam Kahana is a singer, guitarist, pianist, and composer based in Ann Arbor, Michigan. Born in Seattle, he currently lives in Ann Arbor, where he studies jazz guitar, data science, and business at the University of Michigan. Adam is currently a Geri Allen Fellow in the Carr Center Gathering Orchestra, under the direction of Professor Rodney Whitaker. He is also a member of the Bluenote Vocal Jazz Ensemble, the University of Michigan’s only such group. In addition to giving guitar lessons in the area, Adam can be seen performing around town with his groups, as well as with the acclaimed Ann Arbor Guitar Trio.

Darianna Videaux Capitel is a bassist, vocalist, and educator. She discovered the bass at the age of 10 in her home province of Guantanamo, Cuba, where she attended the Arts School. She continued her musical education to earn her Bachelor of Music degree from the University of the Arts in Havana. A classically-trained bassist, she won a position in the National Radio and Television Orchestra of Cuba, as well as an alternating guest-bassist position with the renowned Camerata Romeu. While living in Havana, she was introduced to traditional Cuban music. Darianna enjoys playing everything– from Son, Salsa, and Timba Cubana, to an entire array of Afro-Cuban and Afro-Caribbean genres. With anything from traditional aggrupations to salsa orchestras, she has performed in acclaimed venues across the island of Cuba, as well as in Eastern Europe. She is currently pursuing a Masters Degree in Jazz and Contemporary Improvisation at the University of Michigan's School of Music, Theatre & Dance.